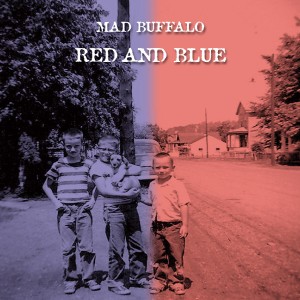 January 5, 2012 – Out of the “Big Sky Country” comes the new release from Mad Buffalo, Red and Blue, which will be released February 21 and distributed nationally by Burnside Distribution. Red and Blue follows the band’s critically-acclaimed 2008 CD, Wilderness, which No Depression called “beautifully fleshed out, with stellar performances;” while Gritz said of the album: “This is a CD that begs to be heard over and over again … In a five star rating system, this one gets six stars. Six stars beside a full harvest moon hanging over a bison filled prairie. Good stuff.” And Honest Tune summed up its review by stating, “Wilderness is an outright jewel that gets better with every listen … one of the best roots-oriented releases of 2008.”

Just like its predecessor, Red and Blue paints sweeping and incisive song portraits of characters and stories that are universal in their scope and appeal. As on Wilderness, the music on Red and Blue was informed by the many years Randy Riviere spent as a wildlife biologist working to protect our rapidly diminishing landscape values. Riviere’s musical influences range from The Beatles and Lynyrd Skynyrd to The Band and Neil Young.

Unlike Wilderness, however, in several songs Red and Blue takes an outsider’s view of the political polarization of our country in the last several years. “The title track of Red and Blue is really about the deteriorating political discourse in our country,” says Randy Riviere. “It used to be that we could have political conversations with folks with different viewpoints and go have a beer with them afterwards and continue to be best friends. Now it’s kind of ‘my way or the highway’ and only ‘true believers’ are allowed. And it’s gotten really nasty. One side has its own news shows, the other side has its own news shows – there’s just this big dichotomy now. And I think much of this is a product of contrived efforts, mostly by big-money America, to keep us divided and voting in specific ways.

“But if you go out in the country, among the folks, away from all the political babble that runs non-stop over the airwaves, it doesn’t take long to realize that we’re all pretty much the same. We all are doing the best we can to live the best we can. This is true whether we live in a red state or a blue state. This is true no matter what church we go to or if we don’t go at all. This is true regardless of how much money we have or which side of town we live in – whether we wear cowboy boots, hiking boots, muck boots, steel-toed boots or sandals. Whether we’re covered with cow shit or have never set foot on a farm. This album is about us, not the politicians and their big money enablers.”

Other songs on Red and Blue are influenced by Thoreau’s ideas about the freedom of living simply, which resonated with Riviere and his family, who have vowed to do all they can to live as self sufficiently as possible. On the Riviere farm, you’ll find cows, pigs, chickens, a sizable garden and some horses. Echoing that sentiment, “Be Here Tomorrow’ is “about a young family’s connection to the ground and things that are really important,” says Riviere. “Another new song, ‘Emily,’ is about the subsequent generation that keeps evolving and always seems to be quite different than its predecessor. In one sense you could think that because the younger generation is standing on our shoulders they should be able to see farther; in another there’s this realization that they wouldn’t set foot on our shoulders if their life depended upon it. And there’s all the political manipulation that’s thrown in their faces.”

And it wouldn’t be a Mad Buffalo album if Riviere didn’t vent some of his concerns regarding the fate of our environment and our unwavering economic priorities in this country. “I’ve been concerned about this stuff forever and feel like the chickens have definitely come home to roost in this economy,” says Riviere. “Wall Street shenanigans, banker bonuses, de-regulation, the ridiculous GOP/Corporate America ‘trickle down’ mantra – which has always seemed to me like someone pissing down my back and trying to tell me it’s raining. Those thoughts coalesce on the songs ‘Walk This Life Alone’ and ‘Set the World on Fire.'”

A big reader of American history, Riviere chose old Tennessee Mountain Man Joe Walker as the subject matter in ‘Big Joe Walker.’ “I just love writing these kinds of songs,” he admits. “I think Walker’s life represented so many things I dreamed about as a kid … being free to roam the stunning American West, before we got here and screwed it up.”